Freud, in his mid-thirties, is traveling through Italy, partially following in the footsteps of his boyhood hero, the great Carthaginian general, Hannibal, when a series of associations lead him to the recovery of the repressed childhood memory of a story told to him by his father, Jakob.

He writes that when he was ten or twelve years old, Jakob began to take him along on his walks “and his conversations to reveal his views on the things of the world.”  He tells him of a particular incident with the avowed purpose of showing the boy “that he had been born in happier times” than his father:

As a young man in the small Moravian village in which Sigmund was later born, Jakob was walking along the street all dressed up with a new fur hat on his head when a Christian came along and knocked it into the mud of the road and said, “Jew, get off the pavement!”

“And what did you do?” was the naked question of the son.

“I went into the roadway and picked up my cap,” the father quietly replied, and Freud notes that this struck him as “unheroic conduct on the part of the big strong man holding the little boy by the hand.”

This devastating found memory would remain in Freud’s dreams and waking consciousness thereafter.

One imagines the father warmly holding on to his young son, feeling him as a formative projection of his own self and speaking (perhaps for the very first time) of that awful humiliation of his young manhood.  But the ostensible reason for the telling – the use of the incident to illustrate the progress that the Jews had made over the course of a generation – is at least as distressing as the raw content of the story itself.

Was Jakob really so oblivious to the effect his account would have on the especially sensitive boy beside him?  So blind to the history of his people as to not grasp that his son would be tested as he had been tested and found wanting on that obscure village street?  Wasn’t he aware in the deepest and truest part of himself of the eternal meaning and peril of the epithet “Jew” as enunciated by his personal emissary from the Christian world?

In The Interpretation of Dreams, Freud contrasted Jakob’s craven conduct and the tragic assumptions that shaped his account with the historical scene drawn by Livy in which Hannibal’s father, Hamilcar Barca about to go off to war in Spain, swears his nine year old to vengeance against the Romans before the family altar.  Between those two existed the generational bonds of Semitic honor that had decayed so terribly over the millennia of Jewish exile.  The redoubtable Hannibal would remain a figure of admiration to the founder of psychoanalysis while during his college years when his “dissatisfaction with the conduct” of his father toward the adversaries of their people surfaced, he daydreamed of having a sire such as Hamilcar. 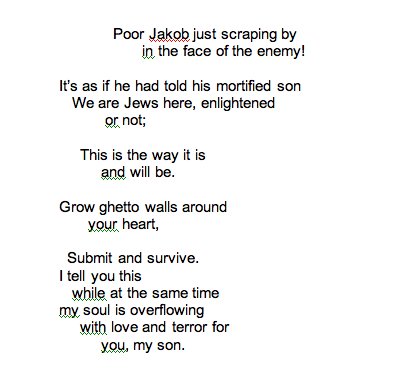 The contemporary Israeli critic, Yosef Yerushalmi, addressing Freud as if he was still with us wrote:

“… I believe you had learned by then [his old age] not to condemn your father for having quietly picked his hat out of the mud.”

There doesn’t seem to have been any real basis, in fact, for this belief, and, of course, Jakob had been dead for a good many years when this forgiveness was presumed to have occurred.

Did Sigmund forgive him when they were both alive?

Did he truly forgive himself for being Jakob’s son?

How do we forgive our fathers their moments of wavering, of cowardice, until we have somehow overcome and forgiven our dishonored selves?

Ivan Klein’s work has been featured in the “Forward”  in 2011 and 2012 and included in the Holocaust issues of the online magazine Poetry Super Highway in 2011 and 2013. Additional magazines and publications include “Leviathan,” “Long Shot,” “Flying Fish” and “Melandragem.” A volume of poems, Alternatives to Silence, was published by Starfire Press in 2000, and a chapbook, Some Paintings By Koho and a Flower of My Own, on the Japanese brush painter Koho Yamamoto was issued by Sisyphus Press in 2011.