There is a mystery about photographs that I cannot entirely grasp, an eerie sense that one is peaking into the past, looking at ghosts of other lives. Every day, as part of my work as a translator at the Ghetto Fighter’s House archive I translate captions and background information about people depicted in numerous photographs. Usually photographs come in as a collection, as part of the estate of a deceased Jew donated by his or her children to the archive.

Recently I was fascinated by a collection of photos of a woman named Golda Noichs who was born in 1913 in Torczyn (Poland at the time, presently Ukraine) to a Jewish family. Her father, who served in the Russian army, was killed in battle in WWI and her mother sustained her three daughters and herself on the meager income she earned from sewing and mending clothes. They suffered from hunger and cold, yet the atmosphere at home was loving and supportive. The mother saved what she could and sent all three daughters to the local school with the conviction that education would secure the girls’ futures and help them find a worthy husband and indeed it allowed Golda and her sister Elka to join later the HeChalutz movement.

The “HeChalutz” was a Global Zionist movement that prepared youths for immigrating to Mandatory Palestine and settle it by working the land. In her early twenties Golda took part in such a pioneering training at an agricultural commune (kibbutz) on the border of Russia and returned full of ideals and with firm determination to immigrate to Eretz Israel. Getting the needed documents was not a simple matter, and eventually Golda married without telling her mother, a sham marriage with a boy named Jacob, which allowed her to immigrate. Once she arrived in Mandatory Palestine, she divorced him and joined a kibbutz, where she met her future (real) husband Mordechai and started a little family in Mandatory Palestine.

What was it about her photos that captured my eye? I had seen dozens of street portraits before – photos of people being photographed as they walked through streets across Europe. What was special about these photographs?

Allow me to describe one of them in more detail. Golda is walking with a girlfriend. In the background there are two storied buildings and some people. Golda’s friend is wearing a little beret, a tight long bottle skirt and a scarf. Golda has pinned her long wavy hair to the side of her head and she is wearing a single-piece dress that highlights her curves. They stand tall and stride energetically, engaged in conversation. Golda is walking arm in arm with her friend and she is smiling.

This walk – the big quick strides, the arm in arm and smile repeat themselves in several photos. 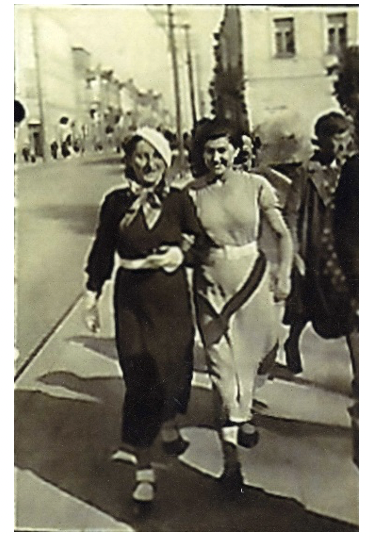 Golda (right) and a friend, probably photographed in Torczyn, Poland, October 1935 (published with permission of the GFH archive)

This photo reflects a unique sense of purpose, direction, a message of feminine friendship and good humor. It seems as though Golda, ignoring the gathering clouds of anti-Semitism, was seizing the moment of the photograph to celebrate her friendship, her youth and her aspirations in life.

The anthropologist Alfred Gell writes about artifacts, including photos, that carry and activate their creator’s intended impact on his audience. He compares creating art to the act of placing a mine that discharges long after the agent has left the scene. When the observer encounters the artifact he is impacted by its emotional content (Gell ,1998).

Hence, Golda as the active spirit behind this photo, knew how to use the medium of the photograph and the skill of the photographer for her own purposes. She loved the camera. There are several photos of her at different stages of life, smiling at the camera. In most photos of the era, if you are not a film star, the customary expression is serious or a slight respectful smile. But Golda is allowing her authentic self to show through. She has an honest expression, open and positive.

There was a strong ideology blowing in her sails. Zionism’s disciples, driven by an almost religious fervor,  had a clear, sober perspective on life, with a will to build a nation, to work hard to achieve their ends, and the understanding that it could be achieved only together, in a group effort. The ideal self of “HeChalutz” is one of authentic courage, the willingness to shed old layers of the Diaspora for the sake of a new identity, that of people who work hard in the field and sing with joy at their toil (Basok 1939). Perhaps Golda’s stance in these photos, her energized optimism, is an expression of this ideal.

Her photos suggested to me that these street photos are a genre all their own. I thought of the keen, curious observer waiting with his or her camera to capture those passersby who looked somehow arresting. The photographer was respectful yet probably strong-minded, as necessitated by the often fierce competition among street photographers, according to the Jewish photography historian Michael Berkowitz. Most photographers at the time started as apprentices in larger studios and then set out on their own seeking new territories. Many of them were Jews, as this was a relatively new profession that didn’t require certification yet did require a great measure of chutzpa (Berkowitz, 2015). I try to imagine how these street transactions went. Did the photographer ask your permission, or stand in the street photographing passersby and then offer to sell you your picture? Or was the photograph pre-ordered by the customer and staged in the street by the photographer’s studio, at a set date and time?

Photography was a profitable profession in a time of great economic depression for Jews. During the interwar years there were opposing forces in Poland. After WWI Poland gained its independence along with new laws imposed by the Treaty of Versailles mandating social equality for minority groups which could be beneficial to Jews. The Polish authorities defied these constraints and enacted legislation nationalizing industries and eliminating Jews from political and economic strongholds (Basok 2001). Poverty among Jews had grown to a great measure. But although the average Jews struggled economically, they were willing to invest money in photographs, sending pictures of their families to their relatives who had immigrated to far places (Shneer 2010).

Might these street photographs taken in the interwar period have symbolized a space that was still safe for Jews to be photographed in? A few years later it would be off-limits, grounds for arrest for walking there without a permit. So the street was a space where you still had a sense of liberty, where you smiled openly to the camera. It was a space where a Jew could do business on the go. The very willingness to be photographed or to photograph embodied a sense of possibility. It celebrated these people’s aspirations for art, culture and national identity. They began their immigration, their walk to the Promised Land, in those street photos.

But if I go back to Golda – Who was her audience at the time? Who did she give these photos to? And when she donated these photos to the archive many years later, was she using the photos as her agents to send on her presence, her positive stride forward into the future? Isn’t it some form of teleportation into the future? Golda wanted to have an impact on posterity, delivering a message of optimism, the will to live, courage, youth, beauty, and friendship, of vitality in spite of the hardship of her life in Poland at the time.

When I spoke to her family, I discovered that she had prepared the collection of photos in a well-organized album that unfortunately was taken apart after her death. I am impelled to ask whether Golda had carefully chosen the elements of her life story through this collection of photos?

A transcript of a family interview with her before her death reveals that from a very early stage in life she liked to write stories and she did it well. As a child there wasn’t enough money for paper so the children at school paid her with sheets of paper in return for a story. What is the story she is trying to tell us through these photographs?

One line of narrative for these photos is that they were agents of finding a mate. As I look at the collection several characteristics arise: Golda had many portrait photos of suiters dedicated to her. But she didn’t have any photos together with a male except when she decided to marry Mordechai, her actual husband – with him and only with him does she have a photograph. All other photos with males are always in a group setting. Had history been edited by omitting more daring photos or is the lack of such photos an indication of her restraint?

Her husband’s collection of photos is entirely different. He has many images with girls, primarily with a girlfriend called Dwora. There are  several studio or outdoor photos of him arm in arm with other girls,  as well as a bold photo dedicated to him from a girl looking into the camera with a daring gaze. He also dedicated photographs to a girlfriend he had in the early 1920s. I wonder if he was a lady’s man– or that was the fashion of his time? Is the difference between Mordechai and Golda’s photo collection an indication of a cultural double standard for men and women?

This little peek into the photograph archive makes one regard these photographs as little agents of young people searching for a mate – dedicating them and sending them to one another. They kept them as trophies of the heart, as testimonies of their desirability. Together they constitute a story about Golda Noichs when she was young.

And here I am, more than twenty years after Golda passed away. I am looking at her collection of photos, getting a sense of her as a human being. These photos portray her as the kind of person I would want to be friends with. She is humble and optimistic, gentle yet full of stamina, as I see in her stride.. I’m sure that after her husband passed away at a relatively young age her strong bonds with her children and girlfriends made her life meaningful.

I cannot know if my interpretation of Golda and her photos is correct, but the photographs are unquestionably have a power to move one. They had set me on a little voyage of exploration to understand better this long-deceased woman. They are agents of one to affect, to allure, to bond with fellow human beings across time and space. Little devices of teleportation.

I would like to thank the Ghetto Fighter’s house archive and my supportive and knowledgable collegues: Anat Bratman-Elhallel, Noam Rachmilevitch, Zvika Oren and Dafna Itzkovitch. I’m grateful to Aharon and Ilana Hazak for their warm hospitality and their willingness to share the story of their family. Professor Nigel Rapport for his important questions; Thank you also to Nina Jawitz for her encouragement and literary friendship; to Professor Michael Berkowitz for suggesting an important source; and to Eliezer Shakhar Pelled for providing a second eye.

Ayelet Abraham holds a PhD in cultural anthropology and she is a translator at the Ghetto Fighter’s house archive.  She has published the novels “The Blackbird’s Call Before Dark” (2014),  “Evanescent bloom” (2012) and in Hebrew two self help books as well as many biographies as shadow writer. Her forthcoming new futuristic coming of age novel “The Tale of Gentle Hussein”, will be coming out in January 2022. Born In Scotland, she currently lives in Nahariya, on the northern shore of Israel. Visit her website: www.ayeletabaham.com