Unlike Hannibal who fatally hesitated and never quite made it through the gates of Rome, Freud gets there in his 45th year, surmounting formidable psychic roadblocks to do so.

He visits the basilica of San Pietro in Vincoli, beholds the horned, seated statue of Moses, finds it wonderfully compelling and returns each summer on what become annual pilgrimages to the Eternal City.  Thirteen years after his first encounter, he publishes an anonymous piece in the magazine “Imago”, which explores the strong feelings the sculpture evokes in him.  He finds it “inscrutable” and “wonderful” and gives us this extraordinary passage:

“How often have I mounted the steep steps from the unlovely Corso Cavour to the lonely piazza where the deserted church stands, and have essayed to support the angry scorn of the hero’s glance!  Sometimes I have crept cautiously out of the half-gloom of the interior as though I myself belonged to the mob which can hold fast to no conviction, which has neither faith nor patience, and which rejoices when it has regained its illusory idols.”

He’s busted by the horned figure’s power, by its look of absolute contempt for the slavish rabble beneath him.

This seated Moses, haughty and disdainful, presses the tablets of the law against his right side – these rough slabs are mine – the word is mine – you are loathsome to me and the God that I gave you!

The fingers of the right hand are embedded in the magnificently executed marble beard; the left hand is way low down on his abdomen, gripping the end of its flowing serpentine mass. – Simultaneously holding on to its god law and the excrescence of his all-powerful manhood.

Vengeance is his to dispense. – Freud felt this right off – that vengeance was his first instinct.  As if Moses was the omnipotent and jealous God of the Hebrews rather than his interlocutor.

He feels himself guilty as charged for being part of
the orgiastic mob,
For giving himself outright to the glistering young bull;
Guilty for being just another bloodthirsty member of that very nearly primal hoard
he will later refer to as the savage Hebrews of the Sinai desert;

Guilty with them of terminal disobedience and the offing of the punitive and restrictive father, Moses, in some obscure byway of the dark past.
(This according to his own theory of the thing.)
Not-so-proud possessor of the pure Jew guilt laid upon us for the murder
of God, Father and Son.
A guilt to which he finds that we alone of all the peoples, with unfathomable obstinacy,
Will not cop a plea, thus making our suffering and the rage against us a hundred times worse.

In the Moses and Monotheism of his last exilic years, he professed to be “astonished to learn that there are [those] who find nothing to admire in the Moses but who revolt against it and complain of the brutality of the figure and the animal cast of the head.”

I stand with those who astonish him, who can’t abide its epic contempt, itsfinally ludicrous and mistaken goat horns tilted slightly forward. 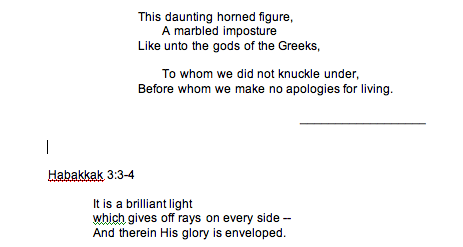 A radiance like a reflection from off the sun emanates from Moses as he descends smoldering Mount Sinai after his second and decisive encounter with the Lord.

A radiance that overwhelmed the Hebrews waiting down below in darkness and led Moses to veil himself when he walked among them.

This effulgence rendered in the Vulgate by Jerome as Moses being “horned.” – What the Oxford Jewish Study Bible politely suggests to be an “overly etymological translation.”

Moses with horns conflates with the horned Satan and the world’s belief that the Jews as members of the Devil’s party have horns as well. – So that we are left with the certain knowledge that things have never really been on the up and up.  – So that every possible suspicion fell upon us, every catastrophe came home to us.

Michelangelo horns his Moses over a thousand years after Jerome, and the horned belief persists to this day, dwelling subtly and not so subtly at the very heart of things.

Curiously, Freud finds Michelangelo’s sculpture, commissioned for the tomb of “the warrior pope” Julius II, morally and emotionally superior to the biblical prophet; he sees this Moses as captured in the act of suppressing his passions, avoiding the shattering of the tablets, “for the cause to which he has devoted himself.”  — The art object as a lesson in constraint to everyone concerned, including the artist.

In that limitation, in the historical revision which Freud perceives as flowing from the figure’s posture, perhaps he finds an emotional amnesty for himself and his unruly tribe.